Six decades of manufacturing expertise. An enabler to help you BRING STILL TO LIFE.

Photoquip India is dedicated to making every image the best it can possibly be, by enabling the creator with the best in the realm of photographic equipment.

The Accordionist, A Tribute 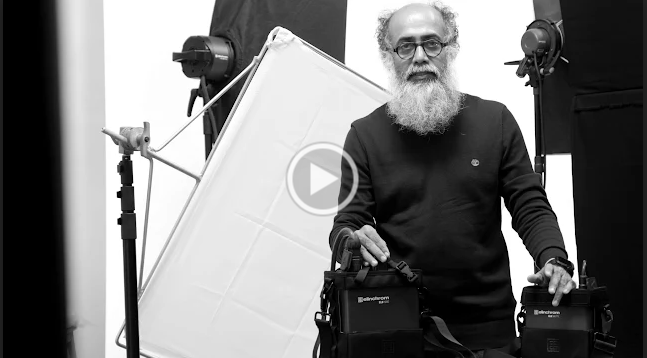 The shoot took place without any prior planning or preparation. It all began with a beautiful red accordion.

My father took possession of a Weltmeister accordion last month, a gift from a close friend. The instrument was bequeathed to my father due to the advanced age and health issues of the owner.

The instrument needed to a bit of maintenance before it could be played and that is when the idea was born. We, my father and I, decided to shoot a few images to showcase the accordion and its construction.

We also planned to shoot a few videos of my father performing on this instrument. As fan of my father’s music, it seemed the perfect way to thank him. Time was, however, of the essence.

Due to the need for quick turnaround, there was no time to plan prior to the shoot. We shot in a shed with no room but for the bare essentials.

I used the Elinchrom ELB 500 TTL strobes with a Deep Silver 125cm (49″) Umbrella on my key light and the 18cm (“) reflector on the second head. The ELB Series offer a beautiful quality of light that require little to no editing in post. The colour temperature is spot on with no visible shift between shots.

This, along with their small form factor were key elements that allowed me to work in such a small space.

For the photograph I set up the Key Light on camera left. I just put it out of frame so that my lens could flare a little. This added a little bit of visual interest to the otherwise plain Black backdrop.

The second head was used as a rim light on camera right just behind the subject. This light was not used for the standing shot, however.

The ELB 500 features a 14W modelling lamp which is not actively cooled. This means that there is no fan noise when recording video. While 14W is not much in many cases, and since we were shooting in a dark environment, it provided the perfect amount of brightness.

The heroes of the shot were both the instrument and the musician in that order. For this reason, I wanted to make the red colour of the accordion stand out.

A simple way to highlight form and texture is to light from the side. I set the light up to split the subject into a lit side and an unlit side. This is often called split lighting. I however made sure that there was still some detail in the shadow side of the image.

To create colour contrast I graded the shot towards the blue side of the spectrum. I tweaked the colour balance till the skin tones looked right and added a bit of pop to the orange pocket square on the shadow side of the image.

A single light source can often be more than enough to create a powerful image. Its simplicity is its strength. Allowing the viewer’s eye to be drawn without being distracted by other elements in the frame.